This has to be class blog of the week. This crazy teacher has written a whole blog post in haiku – that is pretty dedicated!

Just to clarify things for those of you who are as pedantic as me, mb stands for milli-bit and Mb stands for mega-bit. Your Internet bandwidth is usually measured in Mbps or Mega-bits per second, that is 1 million bits every second.

A milli-bit per second connection (mbps) would require 1 million seconds to shift one bit, that is about 11.57 days. Since there are about 16 780 000 bits in a 2MB photo it would take over 531 centuries to shift a single photo!

A mega-bit per second (Mbps) connection would take abut 17 seconds.

Of course, if someone offers you a MBps connection then that is a mega-byte per second connection and since there are 8 bits in a byte you would expect it to be about 8 times faster!

Does it matter? Well I think so, along with capital letters and punctuation. You can change the meaning of something completely if you don’t pay attention to the detail.

What a lovely card from my daughter! 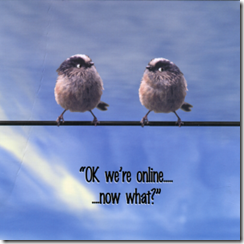